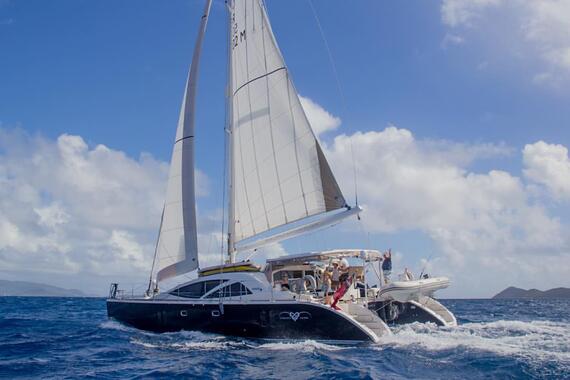 Curanta Cridhe is primarily a great cruising boat. She has been designed with blue water circum-navigation in mind and can certainly cruise with style in luxury. But today, we may add more qualities to this superb sailing vessel. We won first place in our multihull class at the 2016 BVI Spring Regatta! What an amazing week we had racing against other catamarans in the beautiful waters of the British Virgin Islands... 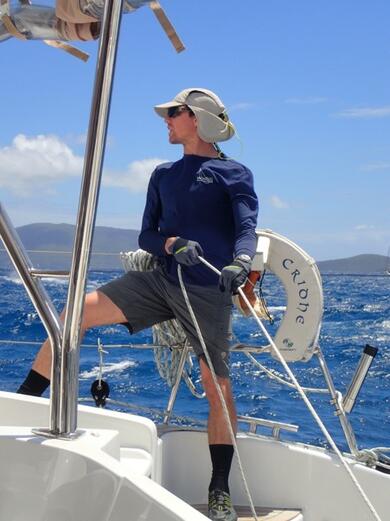 My son Gael brought a positive contribution with his racing skills.

Being a competitive racer is a deadly disease… All my life, I raced sailboats and I competed internationally during fourteen years on multiple sailing platforms (monohulls and multihulls). I have this bad gene in every cell of my body and when I see a sailboat in front of me, I have to trim my sails, get the best out my boat and pass it….

A few weeks prior to the regatta, I asked permission of the owners of Curanta Cridhe if we could participate to the 45th event of this classic regatta in the BVI. I had little time to arrange my crew but I knew I could count on my son Gael and my old buddy Aldo with whom I raced on Soling and Formula 18 cats in the good old days… David Parent agreed to complete the crew and we welcomed them in West End Tortola, few hours after the end of our latest charter. Of course Anne was part of our crew as always… 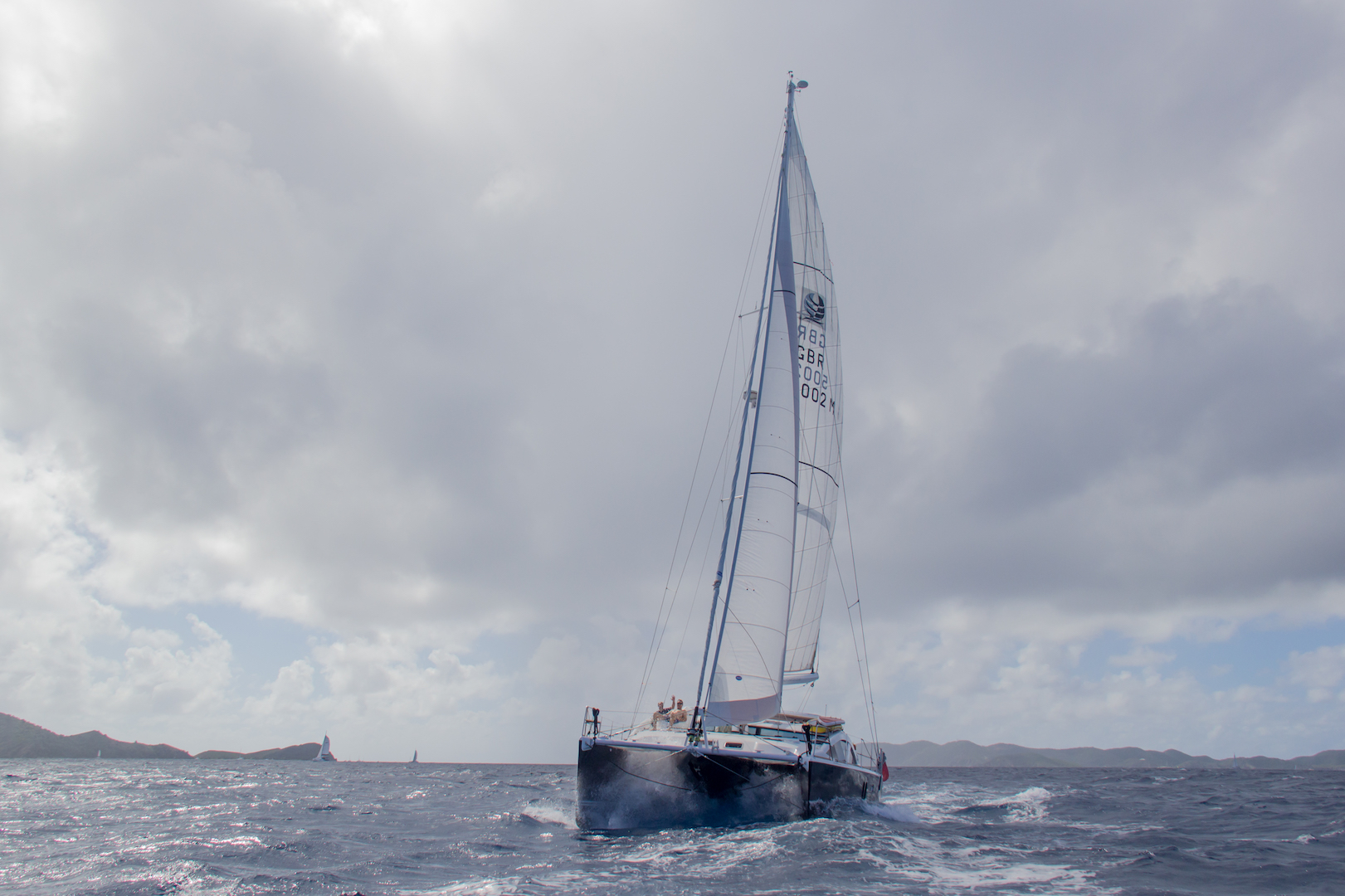 The day after, we registered at the race site in Nanny Cay and went to Road Town to do a grocery for the coming week. On the 29th of March, we had our first regatta: Round Tortola Race. 31 nautical miles around this magnificent island! And a lot of wind to welcome the competitors…

We did a good start despite we were a little bit early at the race committee boat (the favoured end of the starting line), we had to slide on the starting line for a few seconds to prevent a premature start. It was blowing between 20 to 25 kt. The performance multihulls did not take long to catch-up with us and showed their speed and upwind ability.

As we have no dagger boards on Curanta Cridhe and our displacement of 25 tons is serious stuff to move on the water, the performance multihulls took off and we stayed with the other cruising cats battling in the water to windward until we rounded Scrub Island. It took us a while to hoist and set our sails as the crew was not familiar with the boat. We had a blast sailing downwind and maintained a good position compared to our competitors. We were fast under genoa on a beam reach in 25 kt of wind and entered into Thatch Island Cut. When we saw the big cruise ship at anchor in the middle of Sopper’s Hole, I took the decision to round Little Thatch Island counter clockwise instead of clock wise which was the shorter route. This mistake was very painful as our competitors gained a lot against us and we could not recover the distance and time lost before crossing the finish line.

We ended 3rd of our class on this race and were quite happy with this first experience. 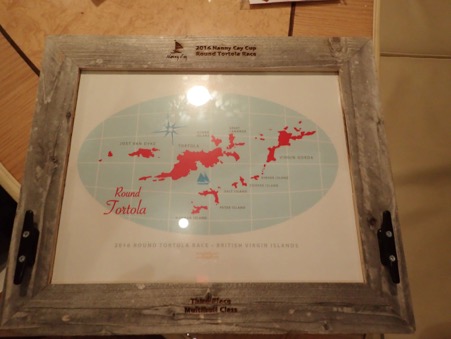 Our trophy for the first race: third position in multihull class.

As we had two minor breakdowns during the race, we decided to repair the day after and not participate to the second race on the calendar in order to be ready for the three last days of competition.

At the award ceremony of the first race, we met the crew of ‘’Wildfire’’ our toughest competitor - great people and fantastic sailors. They enjoyed racing against us and when they heard about our technical breakdowns, they offered their help. We were amazed to see them lending us a car and guiding us toward various riggers, ship chandlers and a sail maker in Tortola so we could repair our boat quickly and be ready for the 3 big days of racing. Thanks again to the great solidarity these sailors demonstrated in helping us.

On Wednesday, we entered into Nanny Cay Marina where we finally got a slip for Curanta Cridhe. We received the visit of the chairman of the race committee announcing they made the decision to divide the multihull class in two: one for performance boats and one for cruising cats. We made the decision to compete against the cruising cats where our competition on the water was.

On Friday, we got a steady 20-25 kt of wind with showers and even squalls. Zero visibility during the squalls while we were sailing throughout the islands, close to the rocks… We got up to 31 knots of wind during a memorable squall while we were battling against Wildfire, tacking in close contact, crossing our bows with a few feet of water between us. What a thrill to compete against knowledgeable sailors like them! 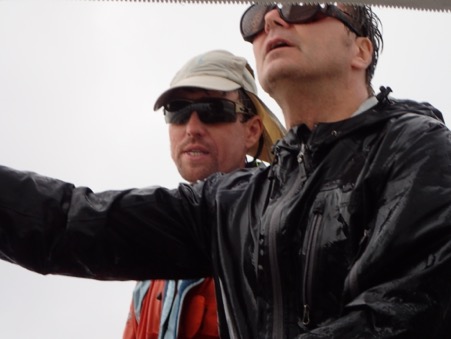 We won two first places that day and we set the tone for the rest of the week.

On Saturday, the wind came down with 15-17 kt and a sunny sky replaced by the grey clouds we had the previous day. We raced again two races, one of them going to Thacht Island down wind and coming back to our starting line close to the Indians. We had a great start calling a Starboard against our friends on Wildfire which forced them to tack and created some confusion in their minds. We took advantage of the situation and escaped leading downwind. They hoisted their Code 0 and worked hard gibing to gain back the distance lost at the start while we choose to go dead downwind staying in the middle of the current.

Sunday was the last day of the regatta and we competed in very light air (5-10 kt of wind). It was hard to move the 25 tons of Curanta Cridhe in these conditions. We managed to do reasonably well and won overall this fantastic regatta in our class. 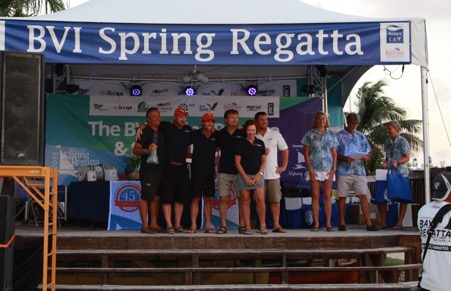 We did it! First place in cruising Multihulls Class

We’ll be there defending our title next year as we had too much fun racing against our friends. A total of 109 sailboats participated in this event in nine different classes. All kinds of boats from the classic vintage Herreshoff to the TP52’s. We had lots of fun sharing our passion for sailing in a beautiful area which in fact is a real paradise for sailors.

A special thanks to the race committee who did a fantastic job. No wonder this year they celebrated their 45th anniversary of this incredible event… They were professional and very well prepared. Pure joy for the racers.