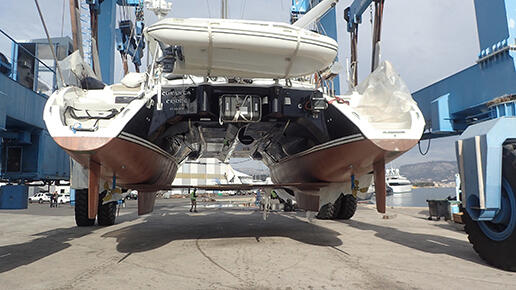 The boat is ready to go into the water!

After more than eight weeks of intensive maintenance work at IMS-300 Shipyard, S/V Curanta Cridhe was finally put back into the water. Her summer season in the Med coupled with a strict maintenance program imposed a lot of work on the boat.

It was good to see her floating in her lines, ready for another demanding sailing challenge.

We left Toulon on November 15, 2017 with a residual Mistral which messed-up the sea. My delivery crew came from Canada, Scotland and the USA. We were six in total. Some of them I knew for more than 20 years, having sailed with or raced against… others were previous delivery crew members and two of them were rather new to me. But a friend of my friend is a friend, and everybody’s great attitude and exceptional spirit made this passage memorable!

After having picked up my crew at the Marseille-Provence Marignane Airport, we drove to St-Mandrier sur Mer to join the boat. Three days of intense work allowed us to finalize the boat’s preparation for this passage. After completing provisioning and a last crew meeting on safety, watch schedule and others issues important to the Captain, we finally cast off the docking lines and set our course dead South.

In the morning, around seven o’clock, I joined the crew on watch and we decided to fly the spinnaker. This residual Mistral refused to die and, under 15 knots of Northerly wind, we sailed with our beautiful parasailor spinnaker for the next two days!

Spinnaker ride in the Med!